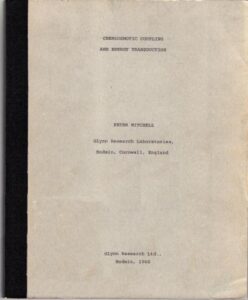 The principles of the chemiosmotic theory were concluded by Mitchell in the publication published by Glynn Research in 1968, known as Little Grey Books of Chairman M. Modern reprint of Peter Mitchell’s Little Grey Book is available now from Biochimica et Biophysica Acta: Chemiosmotic coupling in oxidative and photosynthetic phosphorylation 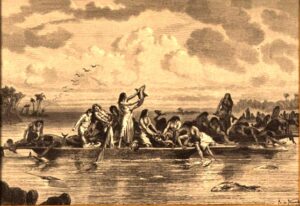 “…None of them could understand how Guapo was to get this revenge without catching the fish, and that would be difficult to do.

Guapo, however, showed them how on the very next day. During that revening he made an excursion into the wood, and returned home carrying with him a large bundle of roots. They were the roots of two species of plants–one of the genus Piscidea, the other a Jacquinia. Out of these, when properly pounded together, Guapo intended to make the celebrated barbasco, or fish-poison, which is used by all the Indians of South America in capturing fish. Guapo knew that a sufficient quantity of the barbasco thrown into the water would kill either temblador, caribe, or any fish that ever swam with fins.” 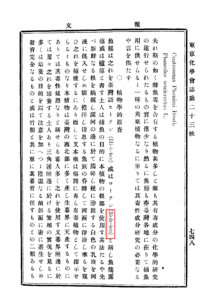 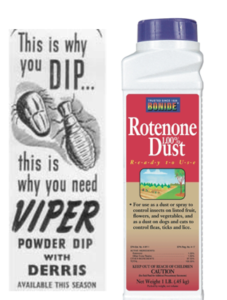 As mentioned by Thomas Reide, fishing by water poisoning using roots of some tropical plants was common in Amazonia  (in fact it still is, see video). Specific compounds called rotenoids are responsible for the poisoning of fish and can be found almost exclusively among legumes in the family Fabaceae. Rotenone, the best known member of the group, was first extracted by French botanist Emmanuel Geoffroy in 1895 under the name of nicouline (from a native plant of French Guiana called Robinia) [Geoffroy 1895].

The wide distribution of rotenone-containing plants explains why this toxicant has been used for a long time as a fish poison by people of many different cultures. The procedure was first documented among natives of the East Indies and South-East who crushed the roots of tuba plant (liana Derris elliptica), sometimes along with small shrimps, mixed it with human excrement and poisoned water in small rivers with this mixture [Rumphius 1747]. The employment of derris extract as an insecticide by gardeners in the East Indies has long been a common practice. The use of Derris elliptica extracts against leaf eating caterpillars during nutmeg cultivation was also reported [Oxley 1848]. In 1902 Kazuo Nagai in Japan extracted a crystalline substance from the roots of Derris chinensis, which he called rotenone from roh-ten which was the name of the plant in Taiwanese [Nagai 1902]. In 1929 rotenone was isolated from the roots of Peruvian plant Lonchocarpus sp., locally known as barbasco or cube. Lonchocarpus plants even became an export product as an insecticide due to their high content of rotenoids. In the beginning of the XX century rotenone was used as a remedial agent for combating mites, fleas and body lice on animals and as a killing agent for house flies and roaches [Ambros&Haag 1936] (see the 40’s advertisement). In 1939 USA imported more than 4 million pounds of Derris and cube roots to make anti-insect chemicals. Rotenone is also routinely employed in quantities of up to hundreds of metric tons to eliminate unsuitable fishes before seeding water bodies with fishes that support commercial fisheries. In science labs, rotenone is used to induce Parkinson’s disease-like symptoms in rats following chronic intravenous injection of rotenone. Rotenoids are a special group of mitochondrial Complex I inhibitors. When rotenone is introduced to the water by mashing the part of the plants, it lyses fish gills and half-paralysed fish are forced to swim at the water surface where they can be easily caught. In early studies it was found that rotenone inhibits oxygen consumption in fish gill filaments, liver tissue slices and isolated liver mitochondria [Lidhal&Oberg, 1961]. It was found to be a powerful inhibitor of the mitochondrial aerobic oxidation of substrates linked to NAD without affecting succinate oxidation [Ernster et al, 1963]. Later, the target of rotenone was identified to be mitochondrial Complex I and it was used widely by researchers in the mitochondrial field. As with many hydrophobic substances inhibiting the enzyme, the rotenone molecule structurally resembles Complex I substrate ubiquinone in one of its folded forms. It is generally accepted that rotenone blocks the electron transfer between the terminal iron-sulphur cluster N2 of the enzyme and the ubiquinone pool. Most likely rotenone binds close to the ubiquinone-binding site of the enzyme preventing entrance of a substrate. Many of the common hydrophobic inhibitors of Complex I are found to share a common binding domain in the vicinity of ubiquinone binding site [Okun et al., 1999]. Due to the fact that interaction between the enzyme and rotenone is mediated through the membrane phase, its kinetic model cannot be described as classical competitive inhibition with ubiquinone. The kinetics of rotenone binding is not trivial and is characterised in terms of tightly-bound reversible inhibitor binding to two non-interacting binding sites with different affinities [Grivennikova et al, 200